Power to the People

A New Art Ambush to Set on a Pedestal 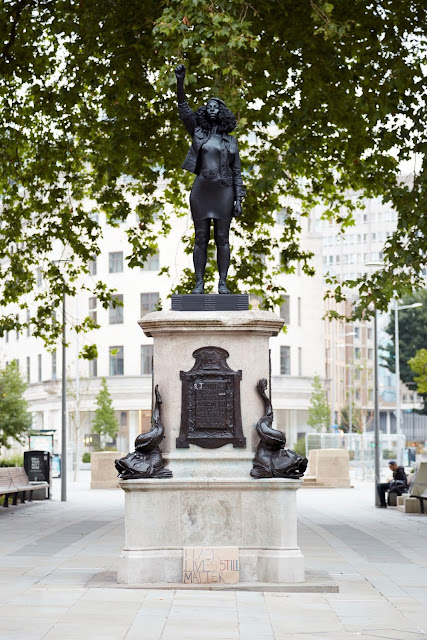 It used to be called ‘underground’ or ‘guerrilla’ art but a new term has seemingly been coined for artist Marc Quinn’s new “ambush sculpture” called ‘A Surge of Power (Jen Reid)’ , which has surreptitiously just appeared on a vacant plinth following a coordinated dawn raid in Bristol. The resin and steel figurative sculpture installed by stealth is of ‘Black Lives Matter’ protestor Jen Reid stood aloft with a single fist raised in the classic ‘Black Power’ salute. Her pose is the same as that which had previously been photographed, as she followed up her overwhelming impulse to climb up onto the very same pedestal several weeks earlier. Then, it had not long been vacated by the statue of the disgraced 17th century merchant and slave trader Edward Colston, who had just been unceremoniously ripped down by her fellow protestors and dumped into Bristol harbour the same day. Asked about the installed artwork afterwards, Reid stood in front of it with her fist again in the air: “That’s pretty fucking ballsy, that it is” she replied.

This is not a lone example of course though. A new global surge is on the rise with a ripple effect of incensed protestors feeling increasingly compelled to join together and pull-down or deface (or vandalise depending on your establishment viewpoint) some of our most controversial public statues. This is not a new phenomenon as similar mass demonstrations in times of civic strife or revolution will testify to, but the peacetime precedent these examples set is entirely unique and is becoming utterly compelling. The epicentre of this wave of uprising was of course the callous murder in police custody of African American George Floyd in Minneapolis in May 2020. Driven on by this crime, came a united call of “I can’t breathe” and ‘Black Lives Matter’ that simply asked for society to reject its embedded racism and cultural stereotyping and to "Join the Movement to fight for Freedom, Liberation and Justice".

Of course, the resulting ground swell of this hugely impressive movement is not just a social media reaction to yet another case of Police brutality and racial inequality: It scratches the surface of a far deeper wound that our so-called ‘civilised’ society had perhaps long thought healed-over. It now prods, provokes and liberates everyone to acknowledge (as if we should ever need reminding) how historically ingrained and hidden-in-plain-sight some of the figureheads from our Imperialistic legacy often are. Some of course remain global icons, but many are far more obscure and previously considered to be benign philanthropic merchants, politicians and soldiers long-dead. Both though have to varying degrees helped establish or sustain a privileged position on top of an old first world order. Subliminally such establishment figures still tint a rose-coloured view back to (in)glorious past empires and victories, as well as to a complacent present and future too. Their statues may not represent outright oppressors in the more dictatorial sense of a Stalin, Sadam or Gaddafi figure, but their aura and often passive-aggressive stance reflects a self-righteous sense of entitled superiority and governance that remains embedded in the fabric around them.

In the United States, statues of Confederate President Jefferson Davis in Richmond, and Brigadier General Albert Pike in Washington have already been toppled. Somewhat unsurprisingly, President Trump has indicated he might sign an Executive Order to protect such monuments. Meantime, statues of Christopher Columbus in Boston, Miami and Virginia have all been vandalised too.

Here in the UK, the ‘Rhodes Must Fall’ protest movement has also finally convinced the Governors at Oxford University that Oriel College should finally initiate the removal of its controversial statue of Empire-Builder and college founder Cecil Rhodes. The implied agreement to remove this symbol of imperialism and racism comes five years after the inaugural movement to “decolonisation” education across South Africa, also successfully lobbied the University of Cape Town (UTC) to remove its own bronze of Rhodes.

Puffed-up and Trump-like, our prime minister Boris Johnson, responded by saying that to remove such statues as Colston and Rhodes was “to lie about our history”. Meanwhile far right groups also converged to supposedly defend the statue (and honour) of Winston Churchill sited in Parliament Square. That this ended up in disgraceful scenes of binge drinking, riotous thuggery and football hooliganism is too depressing to even dwell on.

But it is the reaction by first protest group Black Lives Matter and then artist Marc Quinn that has set the precedent for a fantastic potential future for the graveyard of old statues that proliferate in our streets. Somewhat ironically, arts charity Art UK are only just completing their 3-year nation-wide Sculpture Project to provide a free-to-access online photographic showcase of all such publicly owned sculpture. Further to this, a series of recent BBC Radio 4 debates As the Statues Fall , Should We Remove Controversial Statues? and Racism & Statues also argued both for and against retention. Most compelling of all though is just what kind of new public art should be curated for these empty plinths (if anything) if and when such statues are removed? The jury is still out on that question, but either way, the transient move towards a new iconoclasm looks here to stay - and is something that cannot conveniently be fudged or tidied-up by authorities once the dust settles either.

In terms of Marc Quinn himself, this is not the first time he has installed a temporary artwork on an empty plinth (I say temporary for ‘A Surge of Power (Jen Reid)’ only because Bristol City Council in not being involved or consulted have stated since that it is “not expected to remain”): Quinn's sculpture Alison Lapper Pregnant which I first wrote about in 2004, was installed as part of Trafalgar Square’s ‘empty’ Fourth Plinth programme. It portrayed the naked vulnerability yet classic serenity of disabled artist Alison Lapper. It redressed what Quinn called a “new model of feminine heroism” and countered the age-old male dominance of usual suspects like Admiral Lord Nelson looking down from his great column. Quinn also made a series of works inspired by the riots that followed the police killing of Mark Duggan in Tottenham in 2011. But in terms of ‘A Surge of Power (Jen Reid)’ the artist says he viewed it as a duty for prominent white artists to amplify other voices and stimulate attention and discussion around urgent issues. He reiterated that  “Jen created the sculpture when she stood on the plinth and raised her arm in the air. Now we’re crystallising it.”

When questioned if it was an issue that a white artist had created the work, Reid herself said: “It’s not even a question. If we have allies, it doesn’t matter what colour they are. He has done something to represent BLM, and to keep the conversation going.” Despite the natural misgivings around the far right, white hooliganism seen around the Churchill sculpture, this is an encouraging sign. It is not always the cultural case in the field of figurative artform, which can have a tendency towards the controversial - particularly in the U.S for example. Here, two separate statues of Martin Luther King Jr. have been criticised for not being created by black artists: Sculptor Erik Blome was accused of being incapable of relating to Black issues and creating an authentic “African” pose and face for Dr King for his sculpture installed in Rocky Mount, whilst Chinese artist, Lei Yixin’s Martin Luther King Jr. Memorial in Washington, having been carved in white granite, was criticised for being “too white”.

In the meantime, whilst Jen Reid celebrates the growing legacy of Black Lives Matter with a wider world, the usurped figure of the now-disgraced Colston has since been dredged from the bottom of Bristol Harbour. He is currently being restored, but it has been reported that his daubed graffiti, plus an old bicycle tyre ‘acquired’, whilst under the water will all be preserved for his eventual move to a new permanent home in Bristol Museum.

Despite a 'Statue of Limitations' as some have called it, and regardless of how many centuries ago the conviction, the new public movement is in no mood to be assuaged: Oh, how the mighty have fallen!
Posted by Atoll Collaborative at 15:25