In attempting to rationalise, his intuitive sense of place, time and architectural history, the esteemed Colombian architect Rogelio Salmona once told an interviewer for the Agence France-Presse that he felt inspired by indigenous culture of the pre-Columbian Aztec codices. He illustrated his point using a memorised line of its poetry: “When I enter my home I enter the Earth and when I leave my home I ascend to heaven”. By his own assertion, his personal sense of architecture, as well as that of his own life, was continually influenced by a range of synthesise drawn from direct personal and cultural experiences, as well as more obtuse passions and nostalgia.

Sadly, at the age of 78, Salmona finally left behind for good his beloved Colombian home and ascended to his own piece of architectural heaven. Here he joined an elite pantheon of other greats, drawn from both South American and world architecture.

A few years earlier he had been the first Latin American to receive the highly prestigious Alvar Aalto Medal, being recognised as Colombia’s most significant living architect. His great life work was recognised as a labour of love. It was a passion that also showed immense tenderness and loyalty towards his adopted home of Bogotá. Here it was, over a long career, that he influenced a whole new modern language for Colombian city architecture. His was an urbane vernacular, that crafted humanist city spaces and places, and expounded a more unique and Latin American way of living.

Salmona was born in Paris in 1929 to a Spanish father and a French mother but moved to Teusaquillo in Bogotá with his parents as a child. Despite being educated in French schools, he always identified himself as Colombian.

In 1948 with his Colombian studies interrupted by political upheaval, he returned now as a young man to the Paris of his birth. Here, whilst he both completed his professional and cultural education, he spent the next nine years collaborating at eminent studios, including those of Le Corbusier and Jean Prouvé. Notable projects included working with Le Corbusier on his masterplan for the state capital of Chandigarh, created as part of Nehru’s vision for India, post-independence. 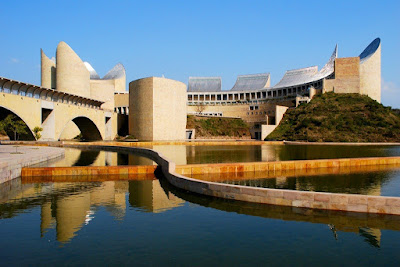 Whilst still in Paris, Salmona also joined the Sociology of Art program directed by Pierre Froncastel at the Ecole de Hautes Etudes at the Sorbonne. As a subfield of sociology, this subject concerned itself with the social worlds of art, technology, as well as other shared aesthetics, drawn from the late nineteenth to mid-twentieth century. Fed by his experiences and influential mentors, Salmona’s education was further informed by travels around France, Mediterranean Europe and North Africa. Here it was that the seeds of a passion for the materialism and spatial richness of Romanesque, pre-Hispanic and Moorish architecture were sowed.

From 1957, following Salmona’s return to Colombia, he then spent the next 50 years as advocate for a new type of design language, and one with a much stronger sense of cultural belonging and interaction among neighbours. Whilst also teaching architectural history at the University de Los Andes, he also set about confronting head-on urban planning conventions and advocating for social responsibility, and a revival of the more traditional arts and craft of brick construction. The use of brick became a signature style and made far better use of Bogotá’s local builder skills and helped shape a whole new Latin American vernacular, but also included Islamic references to such elements as surface relief, pierced screens, walled gardens and water channels. All these gains made to a new local urbanism and architecture transcended the grimmer backdrop happening simultaneously, that was linked to the growing drug and crime syndicates of Colombia and linked in part to the turbulent conflict known locally as La Violencia. 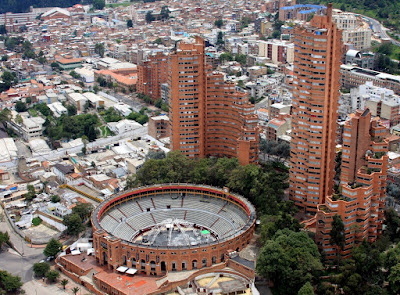 From the 1970’s onwards, Salmona lived in Torres del Parque (1970), his remarkable residential complex design, which is still today a key part of Bogotá’s unique cityscape. His vision presented to the city a series of jagged sandy escarpments and ledges, constructed from his much-loved brickwork detail, but contrasted on plan by softer embracing curves and landscaping, as well as by the classic brick drum of the adjacent Santamaria bullring.
Other notable public works in Bogotá include his Museum of Modern Art (1988); General Archive of the Nation (1992); National University Human Sciences Postgraduate Centre (2000); Virgilio Barca Public Library (2001); and Gabriel Carcia Marquez Cultural Centre (2008). 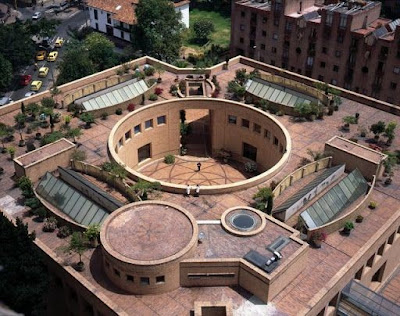 Rogelio Salmona once said that the test of time would tell if he held any validity as an architect. “Good architecture will become ruins. Bad architecture disappears…” he also said, “…but for you to know it is a ruin, you have to wait a lot of time”.  His expressed hope, was that his monumental towers of Torres del Parque would not become ruins just yet, but in a thousand years from now. It would be nice to think it might befall the same fate as the romantic ruins of Colombia’s ancient ‘lost city’ of Teyuna, only rediscovered, after laying forgotten on the lower slopes of the Sierra Nevada de Santa Marta for hundreds of years, in 1976. 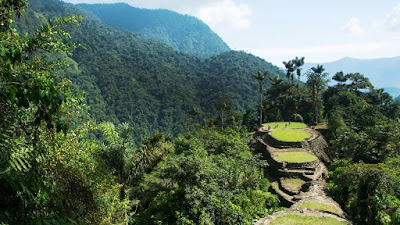 For the present moment at least, Salmona believed that an architects ‘time’ was not to be unduly coveted and saved as a precious ‘gold’, but was to be used, employed and enjoyed in equal measure. “Time is Life. I am interested in living it” he concluded. Architects he felt, should memorise the scale, resonance and echoes that characterize any place, and drawn from their collective subliminal experience then set about creating an architecture of amazing places for gathering an entire city together.


Posted by Atoll Collaborative at 17:25